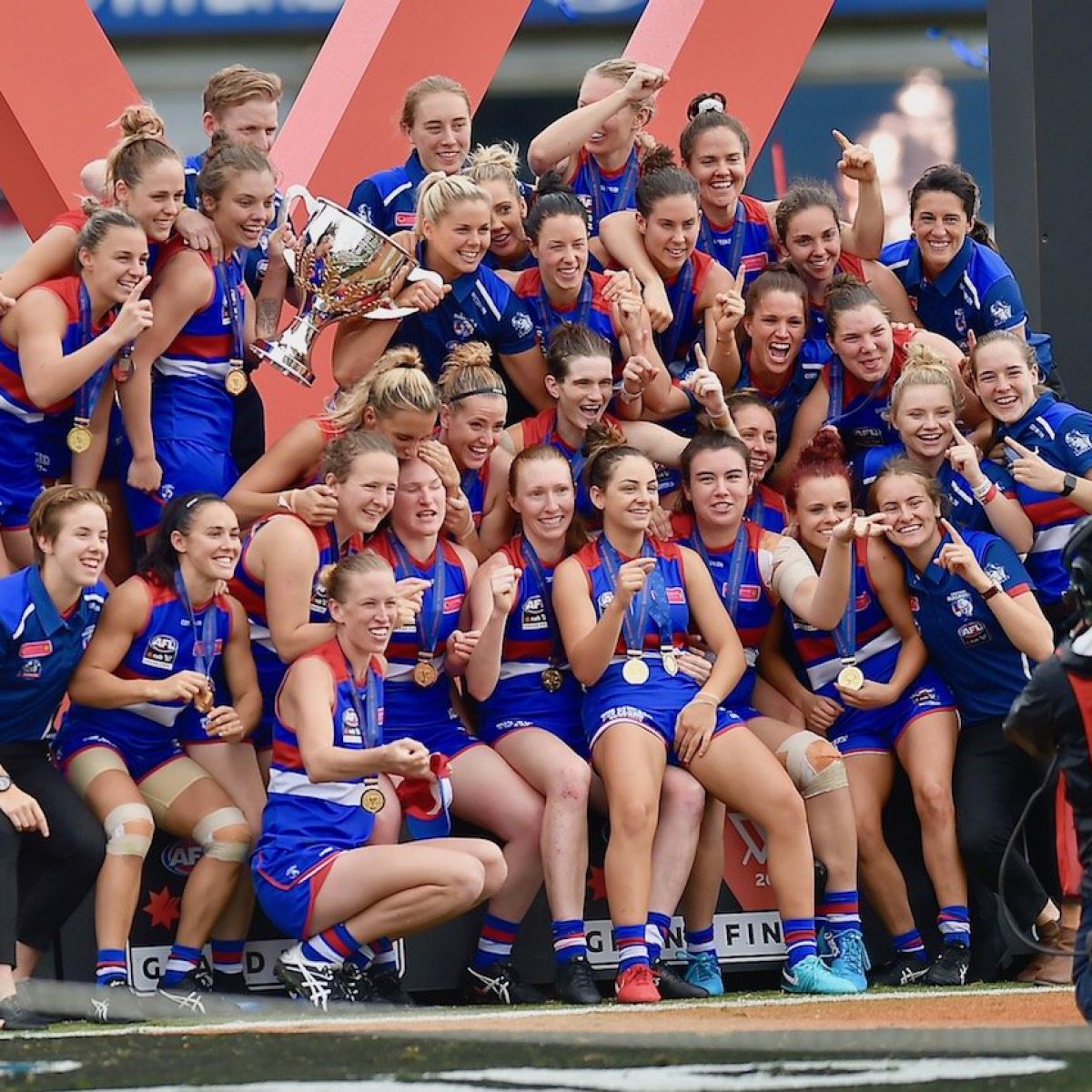 We catch up with Emily Cust who is a Research Fellow with Victoria University, through which she is working with Tennis Australia after previously having worked with the Western Bulldogs. In our conversation with Emily we discuss her PhD in Sports & Exercise Science, work experience and the evolution of womens sport in Australia.

My undergraduate degree was a double degree at Deakin University in Exercise and Sport Science/ Business (Sport Management) which I completed in 2015. An opportunity for an honours project at Victoria University in a Bachelor of Applied Science – Human Movement was offered to me which I completed during 2016. The honours project was part of a larger AFL research portfolio in which I specifically focussed on TAC player workloads. My honours thesis led to my first academic publication: ‘An analysis of training loads in elite under 18 Australian Rules football players’. I was offered a PhD Scholarship through the Victoria University and Western Bulldogs FC partnership which I very excitedly accepted and jumped straight into. During the three years working on my thesis research, I also undertook the role of the Western Bulldogs AFLW performance analyst. I passed my PhD in June this year ☺.

I designed my PhD as a multi-disciplinary investigation of the use of wearable inertial measurement units (IMUs) and analytical methods for sport-specific movement recognition with specific applications in elite Women’s Australian Rules football kick skill performance analysis. The AFLW specific applications included researching the unique characteristics of elite female drop punt kick biomechanics and the relationships of skilled match performance indicators towards team match success. My research then proposes a concept of a semi-automated Australian Football kick type classification system for skill monitoring in an applied environment using wearable IMUs.

You worked with the Western Bulldogs’ VFL & AFLW team. Take us back to 2018, how did you transition from University life to working at a Footy club?

As my PhD was a part of the Victoria University and Western Bulldogs FC partnership I was integrated into the football department and worked across various roles alongside my PhD research. During this time, I had many opportunities to learn, upskill and experience the operations of different departments across both the men’s and women’s AFL and VFL sides. The research partnership was also pivotal in facilitating my PhD data collection by having access to elite athletes, training facilities and equipment.

The research project was the largest of its type ever conducted and also featured one of the largest Vicon capture areas ever constructed for outdoor comparisons with 36 cameras! So, this alone provided plenty of chances to up-skill quickly in applied sport biomechanics, tracking data, and project management.

You were with the AFLW team for almost 3 years, tell us about some of your responsibilities around the team?

Aligning my research with the inaugural AFLW season and being a part of the Bulldog’s team development over the first three years was a fantastic experience. As the AFLW team performance analyst I worked closely with the AFL and VFL men’s performance analysts to continually expand the services we could do in training and on match day each season.

The first season I was collecting and reporting training and match day GPS. By the third season I was leading match day operations for pre-game coaches box set-up, in-game performance analysis, and post-match vision review reports. Training session responsibilities involved liaising with coaches and high-performance staff around training drills or athletes to collect and report performance data for, compiling opposition analysis reports leading into game day, managing and communicating all training and match-day vision for coaches and players, and the co-supervision of undergraduate cadet students in the program.

Through your work with AFLW and your publications involving female Australian Rules football you’ve built an impressive amount of experience in the industry. What are your thoughts on the evolution of AFLW and the plans over the next 2-3 years given the current environment?

The announcement of the inaugural AFLW season was a key motivator for me to pivot my PhD research towards women’s football. Stand-alone research in elite women’s sport is a crucial element in progressing professionalism and athlete performance outputs. The two AFLW specific studies I undertook and a few other recent papers in the field have highlighted the unique skilled characteristics of AFLW athletes which can have implications for how training structures and match tactics are approached. The expanding development pathways and junior and VFLW competitions can only increase the strength of the AFLW for seasons to come.

I think it is also quite interesting seeing the number of cross-code athletes in the AFLW and the distinctive elements they bring to the game from the skills they’ve developed in their previous sport. The AFLW is cementing its own place in the sport and has the potential to progress towards a full-time professional league in the long term. With the uncertainty of the current climate hitting all sporting leagues around the world it is hard to comment on how this will specifically impact the AFLW plans over the next few years.

I was fortunate to be a part of a very experienced research team from Victoria University and Track for validating the accuracy of Electronic Performance Tracking Systems in football (soccer). During both testing periods in 2018 and 2019 as a research assistant, I was mainly involved with aspects of the Vicon operation, participant marking set-up, and post-testing Vicon data processing. There were many opportunities to also learn about the different athlete tracking technologies we were testing and experience first-hand the behind the scenes operations that go into what you see on screen during professional football matches.

The research project was the largest of its type ever conducted and also featured one of the largest Vicon capture areas ever constructed for outdoor comparisons with 36 cameras! So, this alone provided plenty of chances to up-skill quickly in applied sport biomechanics, tracking data, and project management.

More recently you’ve worked with Tennis Australia through your time as a Research Fellow at Victoria University, tell us about your work in sport analytics there?

Yes, currently I hold a position as a Research Fellow with Victoria University and am integrated in the Tennis Australia partnership. I began this role in January 2020 and jumped straight into the Australian Open working with the Game Insights Group (GIG). Those two tournament weeks were quite possibly one of the most intensive but insightful working experiences I’ve had. Working with the sport analytics team during competition mode in delivering match information to a range of end sources was a steep learning curve!

Currently, I am working on projects for both the GIG and the Tennis Lab teams at Tennis Australia. These projects include analysing the player HawkEye tracking data, and developing racquet and string recommender models for a commercial phone App and in-house athlete testing.

If you could use your experience from your PhD & working with various sports to work on improving a sporting team anywhere in the world, who would it be and why?

During my travels overseas last year around an academic conference and the VU-FIFA research work, I met several academics in sport analytics and heard more about the rapidly expanding European Women’s Football leagues. Working on driving performance analysis operations for a top team in the Primera Iberdrola (Spain) or FA Women’s Super League (UK) would be a fantastic progression from my PhD in the AFLW.