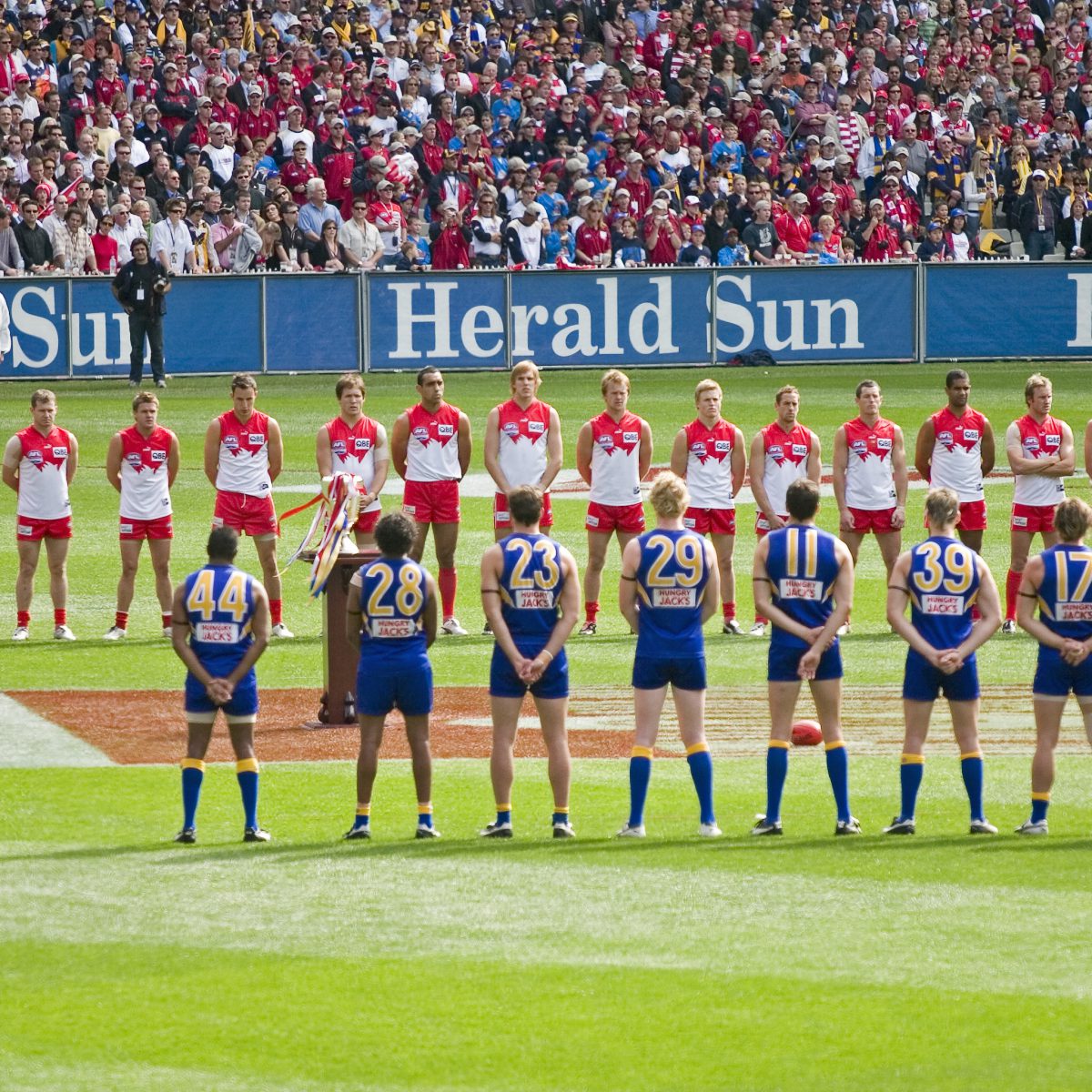 We caught up with Rhys Tribolet who is completing a PhD Sport & Exercise Science and has worked with the Sydney Swans since 2017. We delve into his journey from a Bachelor’s Degree to a PhD, evolution of his role with the Swans & tips on how to set yourself apart when looking for your first role in what is only becoming an even more increasingly competitive industry.

I began studying Sport and Exercise Science at the University of Technology Sydney in 2014. Towards the end of my degree, I volunteered to do some youth athlete testing at the Sydney Swans Academy, which was part of a previous students honours project. I really enjoyed it and loved the interactions with the kids and the staff, which led me to pursue an honours project with the Swans Academy, beginning in 2017. The honours project focused on characterising (physical, movement competence and skill ratings) the academy athletes aged 12-15 and distinguishing how athletes that were selected to progress into the U16 pathway differed to those who were deselected from the pathway (e.g. were selected athletes taller, more powerful, did selected players mature earlier etc).

In the background, my supervisor (Job Fransen) had developed a professional relationship with the senior coaches at the Swans. On top of this, UTS had a long-established collaborative research partnership with the Swans, which mainly focused on physical performance, whereas we now wanted to work with the coaches around coaching science/skill acquisition, practice design and performance analysis, which is where I am currently. In that, I was fortunate and lucky that the relationship had been established and the coaching staff were receptive for a project to begin in that space.

My PhD focuses on improving the transfer of practice to competitive matches. It largely attempts to assess a range of things during practice and understand, from a collective and team behavioural perspective, how much of our practice reflects what players actually encounter during matches (i.e. is the information the players and team use to make and execute decisions and skills during a match present in our practice). Some of these include the time spent in certain practice activities and how that changes across the season, coach interactions with players during practice and what factors influence how much feedback coaches provide or understanding how passing networks and skill characteristics change as a result of manipulations coaches make to the practice design (e.g. player numbers, field length, width, outnumbers etc).

Ultimately, we try to measure things like these to assess practice and then inform the coaches on specific manipulations that led to favourable outcomes in relation to winning competitive matches.

Which aspects of your experience do you think were critical in you getting your role with the Swans?

In the beginning, I think it was more a willingness to work very hard and ask questions where I could. I was also fortunate to work closely with Job Fransen, Will Sheehan and Mark Watsford to provide match review and opposition preview reports to the coaches in my first year, which delivered simplified passing network information to the coaching staff. We were able to profile teams based on their ball movement and the importance of specific players or styles they played. At the same time, I was teaching at UTS which allowed me to start integrating principles and frameworks from skill acquisition and motor learning and control into my own experience observing professional players practice.

I think areas that could grow in the future may include enhanced incorporation of coaching science/skill acquisition into the coaching and analytics workflow as well as enhanced utilisation of event and xy data in the AFL.

It’s been more than three years now with Swans – how has your role evolved over time?

Initially, it was purely strength and conditioning work with the Swans Academy which then transitioned into the coaching science/skill acquisition/performance analyst role with the seniors. When I first begun with the seniors as just a PhD student, it was very much observation and data collection during training and data collection from competitive matches. There wasn’t a significant portion of time spent with the coaches or other analysts as we just wanted to collect data, not step on any toes and work with it from there.

At the end of my first year as a PhD student, I was fortunate enough that what we were collecting was of some relevance and benefit to the coaches, and they wanted to pursue what we were doing a bit more to help monitor their practice design. From there, I was then involved with the more day-to-day program and working a lot more closely with the coaches and the other analysts. I still have a large focus on practice design and assessing that and working with the coaches on that front, but I now also perform and align some analysis we do with each line/position coach.

Who do you rely on as your support network going through a PhD and working with a football club and what are the key bits of advice you’ve received over the years?

There are a fair few people who I rely on and who help immensely with work and research simultaneously. I have relied heavily on both my supervisors, Mark Watsford and Job Fransen, for both guidance and assurance throughout my time at the Swans. They have helped provide knowledge and procedure to my work but also perspective to a lot of things, work and life in general. I received a lot of help from all of the fitness staff who I worked closely with in my first year, but particularly from Mike Rennie and Steve Kelly. They had both finished their PhD’s too, and it was nice to hear their experiences and how they managed research and work simultaneously. Additionally, Will Sheehan and I began our PhD’s at about the same time at the club and they were very closely related, which was good to bounce questions and ideas off each other. The coaches and other analysts also provide great information and resources to improve workflows or discuss potential implications of research and translating that into day-to-day activities.

Some key bits of advice I have received would be to use language that is simple and not full of jargon, especially in the areas of skill acquisition and performance analysis. Additionally, use and integrate similar language to the stakeholders you work with as it is much more digestible and relatable for them. Another thing I now always revert back to is to always try ask yourself what is interesting versus what is actionable, as there are plenty of interesting things you can extrapolate from data, but how can you use that to inform decision making for practice, strategy/tactics etc.

What are some of the most exciting or challenging aspects of your role you wouldn’t have expected before you entered the industry?

The exciting parts involve being amongst people who are constantly challenging each other to push the limits of performance. It is an intense environment where people demand and expect high standards, but that has been really enjoyable from my perspective. I find that questioning and challenging people is beneficial for an environment like professional sport, which is really prominent and common, and I’ve found that to be the most exciting thing for me. Even though I haven’t been involved in too many either, being inside the coach’s box is very special too.

One of the more challenging aspects with the role was around trying to break the stigma around skill acquisition and how specialists can complement coaches and analytics simultaneously. Implementing a framework that integrates scientific principles with coaching intuition was difficult to explain and implement and understanding how analytics could help and benefit answering specific questions in this process was also difficult.

What advice would you give to aspiring sport scientists and analysts coming into the industry now given the current environment?

It is a very difficult environment to become involved with currently and unfortunately it may be for the short-medium term. I think the most important thing is always trying to upskill yourself. Trying to learn different skills that are relevant for these vocations, like Excel and R. Also understanding how and why the things you are upskilling yourself in are relevant and if they align with the role you want to perform in an organisation.

Are there certain skills that will become more valuable in the next couple of years and any areas within sports science & analytics that you think could grow in demand?

I think it is a skill that has always been crucial but will remain so and that is being able to translate the work you are doing to relevant stakeholders be it coaches or players or other staff. But before that communication skill, you should have a good understanding of the things you are working with, how they are developed/measured and what the limitations are too. Ironically, I think certain skills will have to be developed in multiple domains as support staff groups will become smaller as a result of this year, and workloads get spread across multiple areas. Nonetheless, working with data and information is everyday work within sport science and analytics so working with this and generating insight remains important.

I think areas that could grow in the future may include enhanced incorporation of coaching science/skill acquisition into the coaching and analytics workflow as well as enhanced utilisation of event and xy data in the AFL. Tracking data is always mentioned in the conversation of analytics, but it does require extremely specific skill-sets working with large amounts of data, then to translate it to something that is actionable requires another skillset.

From Gaelic Sports In Ireland To Womens Football At Collingwood FC